Create an Account - Increase your productivity, customize your experience, and engage in information you care about.

The Town of Hampton was first known as Hoover's Crossing, taking its name from George Hoover, who operated a general mercantile business and also lived and farmed in the area. The Town of Hampton was incorporated on December 23, 1879, named in honor of Confederate Civil War General Wade Hampton, who also served as South Carolina's governor. 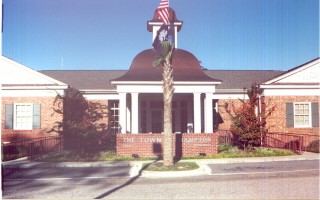 Hampton County was born in 1878 after a petition of citizens asked that the area be cut off from the Beaufort District. When the geographic center of the county was determined to be unsuitable for the county seat, the area known as Hoover's Station was selected. The land for the courthouse, jail, and other buildings was donated by Colonel George Hoover, Mrs. Josephine Lewis Hoover, Major W.H. Mauldin and Captain A.A. Browning.

The town is located in the northeastern section of the county. Major highways through the town include Highway 278, Highway 601, and Highway 363.
Online Bill Pay
Pay your traffic tickets and taxes.
Receive Notifications
Get updates on county news, events, and more.
CPST Projects
View photo gallery of recent projects.
Agendas
Minutes
Videos
Here we offer meeting agendas, videos, and minutes from past meetings.
Employment
View current openings.
Recreation Programs
Sign up today!
Report a Concern
Let us know about litter, potholes, and unsafe conditions.
[]